In Celebration of HM QUEEN ELIZABETH II 90th Birthday we present on June 10th, 2016, a day prior to the “Trooping of the Colour” in London, a special and unique bottling of a Single Malt Scotch Whisky.

The story: Gillespie & Partners buys a cask in Scotland containing single malt whisky.
On HM the Queen’s birthday, April 21st this Macduff single malt was distilled and exactly eight years later, today, the 21st of April 2016 this single malt whisky is bottled yielding a mere 312 bottles.
The label had to be approved by Lord Chamberlain’s office (see below an excerpt of the letter)

Thank you for your email with your proposed label to mark The Queen’s 90th birthday.
We would have no immediate objection to your proposal, based on the materials and explanation in your email. We are however unable to formally approve or endorse your proposal.
To enable manufacturers to mark Her Majesty’s 90th Birthday, the usual rules governing the commercial use of Royal Photographs and Insignia have been temporarily relaxed to allow their use on certain souvenirs. 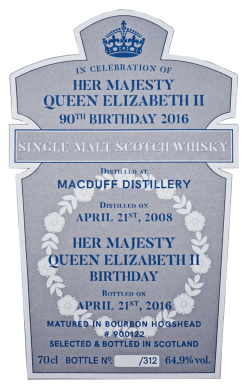 Following menu will be served: Waldorf salad with fried crayfish, „ A Roast of Beef“ with skirlies and vegetables or asparagus with sauce hollandaise and as desert “pear in red wine sauce”.

For Càrn Mòr Society Members and their friends the contribution for the whisky tasting and dinner will be 48,- p. P.
The minimum number of guests is 20 and the maximum number of attendants is 35. Please make sure to make your booking well in advance.

I am looking forward to meeting you on 10. June 2016
Thomas Gillespie

You can find out more about which cookies we are using in settings.

This website uses cookies so that we can provide you with the best user experience possible. Cookie information is stored in your browser and performs functions such as recognising you when you return to our website and helping our team to understand which sections of the website you find most interesting and useful.

Strictly Necessary Cookie should be enabled at all times so that we can save your preferences for cookie settings.

If you disable this cookie, we will not be able to save your preferences. This means that every time you visit this website you will need to enable or disable cookies again.